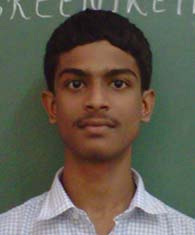 JNV Palakkad I'd like to become a Dakshana scholar and hopefully attend IIT
I'd like to become a Dakshana Scholar and hopefully attend IIT because it was my dream since my ninth class to get into IIT and now Dakshana is providing a really good opportunity for students to get a seat in IIT. IIT?s are one among the best institutions of the whole world. Therefore I would be very proud to be an IITian. Also, Dakshana is doing a really nice thing to give free coaching and study materials to students from the backward classes and from poor economical backgrounds. There are lot of population in India who are not able to attain good education due to lack of money and resources. This special IIT coaching programme done by Dakshana may be able to bring up a lot of world class engineers and technicians from India. We can hope that these people can transform India from a developing nation to a developed nation. Dakshana is providing lot of study materials and world class coaching for students and by bringing lot of IIT aspirants together they would also be able to create an atmosphere suitable for studies.
With the style of coaching provided by IIT and the study materials provided by Dakshana, it is almost sure that you will get a seat in IIT once you get the Dakshana scholarship. Once you get the scholarship from Dakshana, hard work and a strong determination will surely take you to IIT. For me, it is really nice to have world class IIT coaching without paying my fees because the fees of other coaching institutes are really not affordable. Hard work, along with the coaching given be experts in fields of science, and maths assure a seat in IIT. There may be thousands of IIT aspirants like me, who could make India a lot more developed, once they get a set in IIT. Dakshana is providing a chance for all such people for getting into IIT.