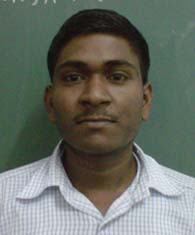 JNV Varanasi I'd like to become a Dakshana scholar and hopefully attend IIT
I'd like to become a Dakshana Scholar and hopefully attend IIT because Dakshana provide me a best coaching for preparation of IIT. I belong to a poor family so I could done very hard work. But Dakshana helps me as a guidling for the preparation for IIT-JEE.
I am lucky to selected as a dakshana scholars because in the absence of Guidline no one can crack like IIT-JEE exam. In the previous year from my school who was Dakshana scholar are selected in IIT-JEE. I had qualified NTSE IInd level but in the absence of guidlined I could not qualified in the IIIrd level interview exam. So in the current time the guidlines is very important for a aspirant of any exam like IIT-JEE. So I tried to work hard and selected in IIT-JEE 2013. Thanks Dakshana who give me a best coaching.
Satyaprakash Choudhary
7-8-2011