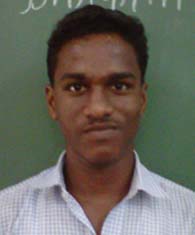 JNV Kottayam I'd like to become a Dakshana scholar and hopefully attend IIT
I'd like to become a Dakshana Scholar and hopefully attend IIT because my ultimate aim is to become an engineer, strictly spoken, a networking engineer. It is my privilage to study or to become a part of such a world class engineering coaching institution. Real engineering is pure creation and I want to be creater myself like the wizard of Mento-park, Thomas Alwa Edison. I am sure that Dakshana will sharpen me to be an engineer as well as an IITian.
Like any other field, there is much competition in the IIT-JEE coaching field. But, always the best is preffered over better. Best is nothing but Dakshana. I?ve heard many things about the Dakshana from so many engineers, when I asked them what is the best way to be an IITian. So I am very lucky to be a Dakshana scholar while it is the best way to be an engineer.
From my school, one boy was selected to Dakshana, wen he was an average student he is now in the Chennai IIT. I?ve decided that I will do a job, which gives me lot of extra time. Isn?t engineering give me extratime? I am very happy that I will be writing this exam. In higher secondary level, I want to study about interesting thinkgs in the world like about oceans, planets etc.
I?ll be very pleased if I selected to be dakshana scholar, and in my life it?ll be a milestone in my life.