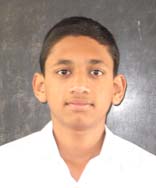 JNV Chikmagalur I'd like to become a Dakshana scholar and hopefully attend IIT
I'd like to become a Dakshana Scholar and hopefully attend IIT because Every engineering aspirant likes to attend IIT in India, as much as a Scientist yearns for a Nobel prize. Once in an IIT, one can get the best of facilitie professors, tutors from all over the India to guide you to your goal. To achieve a goal you will have to gain and lose things. To qualify in IIT-JEE one needs to gain the utmost knowledge of what is needed. Dakshana here comes to action, facilitating us, boosting our life on the of JEE. It gives us coaching from T.I.M.E. The best IIT Tutorial in India, Giving us everything we need. After becoming a Dakshana scholar our one and only goal is to score the top most ranks in JEE. We will put our heart and sould in it. I will surely perform my best at every level, every step through Dakshana to IIT. IIT-JEE not only provides you opportunity to join IISc Bangalore. Sparton is a word used for a warrior trained in Sparta. Everyone in Ancient Greece honoured a Spartan. Now, Dakshana scholar is such a name, in few years everyone will honour a Dakshana scholar. When a individual grows, He leads to the growth of society. Dakshana trains 100?s of them, leading to growth of 100?s of Indian societies, and eventually leading to the growth of India. Many people just waste money, but Dakshana is an example for the best use of money for the society. One may not have been selected by luck but he is truly lucky to study in Dakshana under T.I.M.E. But this I will be able to serve my best for the country and humanity. By Powering ourselves to the maximum we make ourselves the greatest human resource.