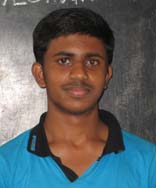 JNV Bengaluru Rural I'd like to become a Dakshana scholar and hopefully attend IIT
I'd like to become a Dakshana Scholar and hopefully attend IIT because India requires qualified and skilled engineers, in order to get them, a lot of filtration of Indian youth is mandatory. We are the rural students of the country are in need of some kind of help to come forward. As our Mahatma Gandhiji says, ?A challenge which can be fulfilled by one person can be fulfilled by everyone.? This saying inspired me very much. ??If anyone can get AIR-1 to IITJEE, Why not I??. I took this as a challenge. This challenge is almost fulfilled when I became a Dakshana scholar. But there is a long way to go. A lot of changes may occur in these 2 years. I hope Dakshana will fulfil my dream. If Navodaya is one bank of the river and IIT is other bank, Dakshana serves as a boat to cross the river. We sailors should have our own effort to get into the other bank. Dakshana provides a boat but efforts to sail it, should be ours.
Ö stands for Oppurtunity. There are none in Yesterday, But there is one in today and three in tomorrow?. Like this these was no opportunity for navodayans to prepare for IITJEE but now we have one, that is Dakshana later we may have many opportunities to get the coaching for IITJEE. I am very much greatful to Dakshana to giving this wonderful opportunity for navodayans.
I?ll promise that I?ll completely utilize this golden opportunity and work hard like an Olympic champion to clear IITJEE. Limit (AIR -1) IITJEE ranking if anyone joins to Dakshana and work hard. Anyone can achieve success if they have these two things. One is skill and another is Hardwork. Dakshana helps us to increase and develop our skills and if we have hard work as our component then automatically we march towards success.
To get the same coaching outside the JNV we have to spend lakhs of money which is not affordable to the rural people of India. Dakshana is providing very high standard coaching continuously for 21 months until the very day before the IITJEE. I'd like to thank my parents, teachers, friends and everybody who helped me to clear GDST and I?m thankful for the Dakshana founder to giving this wonderful opportunity.