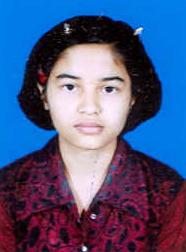 I’d like to become a Dakshana Scholar and hopefully attend IIT because its not only a dream, its really a strong desire and I was longing for it from the year I came to know about it. I was searching for such talent search exams in which I could prove myself, I could judge my capability and this is not a small thing. I am very much interested in such tough exams and I?ll be the luckiest one if I would get it. I want to get it, cause I want to appear IIT after a well-developed preparation. I wouldn?t have got this chance if I wouldn?t be reading in this JNV. I appreciate this idea, poor students could get a chance a could get a high level coaching. I am also a student from lower middle family in which girls are not given importance and I am very much proud that my parents use their last resource for my study, and I want to become a Dakshana scholar so that I could decrease the bourden over my parents. I am very much passioned and I am sure after getting such a coaching I could qualify IIT. I had seen many students of my school who had qualified IIT after taking 2 years of coaching by Dakshana. They are my inspirations. I am not so strong in physically but my strength is my mentality I will by my level best to achieve this. ?Success? the word is very lustic but very powerful but not so easy but very charming. With the help of high dignified, and qualified who had tasted this I can surely get IIT it?s my belief. But except all these hardworking is also needed. I wanted to become a part of this foundation cause students from every state of India would have been selected I could get an opportunity to learn many things I could feel the diversity and the unity among all Indians. After all I wanted to be a well developed and educated person I want to be identified as a dakshana scholar which has recommendation in the whole world for IIT JEE coaching. It?ll really be a great thing for me if I?ll get such a chance to take coaching from this world class IIT-JEE coaching. Oppertunity doesn?t come directly but it really comes through some persons who takes you to higher point in life. If I?ll loose this opportunity I?ll be the looser one so I have to achieve this at any cost which will show a path for a bright future. I wanna give all my thanks and tributes to such a great personality for introducing such a brilliant chance and thankful to the members of dakshana foundation for implementing the thoughts and doing it smoothly and also thankful to them who had told me to appear this exam.