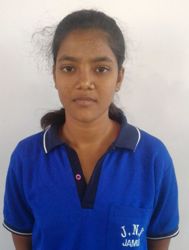 JNV Jamui I'd like to become a Dakshana scholar and hopefully attend IIT
I know that this fondation will help me alot.
When I heard about Dakshana Foundation ,I became happy .Because children like me who belong to a poor family can't afford IIt coaching
which are very costly.Many times they can't become what they want.
When my name was announced for the examination Dakshana I really became very happy and decided to pass this examination.
When I heard that i have been selected in dakshana I became sure to be an IITian.
Now I am in Dakshana lucknow and getting coaching for IIT and other facilities like other costly private coaching even more than that.
It has provided us the required material that will give us idea about the question pattern.