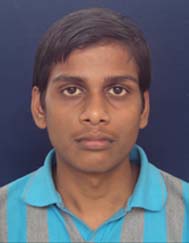 JNV Khurda I'd like to become a Dakshana scholar and hopefully attend IIT
I'd like to become a Dakshana Scholar and hopefully attend IIT because of my dreams. In my childhood days I have dreamt of becoming a prominent scientist in the field of chemisty.(That is PhD in Theoritical Chemistry)
So, I am preparing to study at IISER ( Indian Institute of Science Education & Reasearch). for studying at IISER, I required to get a merit lit rank in the IITJEE(1-5000). So, I want to become a Dakshana scholar to fulfill my ambition.
Due to my passion i.e ?Science?I want to study at good institutions. I am sure that in Dakshana I will proper guidance to go ahead and secure a good rank in IIT-JEE. If not at IISER then at IIT Bombay I cn persue my higher education in ?Pure Science?when I get the coaching at Dakshana.
I want to get into a studious atmosphere and have competitive spirits. So, I want to join the Dakshana.
Dakshana coaching will help me in covering the distance between the IITJEE and X(exam). Dakshana campuses (the JNVs) have very competitive studious environment. There the Lecturers, teachers even the counsellors come to help children. These are the lines of senior batch student of my school who is already in Dakshana. (Name ? Srinivas) I will be very keenly waiting to the Dakhana-2nd bathch (JNV R.R) result in the IIT-JEE 2013. I am very sure that all 54 student of this batch will get a rank in the merit list.
It is also the sense of Nationalism in the living in between 54 students from different part of our India. It can be called as ??Mini ? India?. The coaching at Dakshana is the Platform for a student to study at IIT.
At last I convey the fact that :-
?East or West
Dakshana is the Best. ?