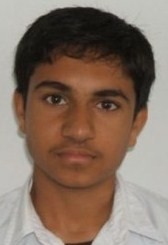 JNV Sabarkantha (Aravali) I'd like to become a Dakshana scholar and hopefully attend IIT
I'd like to become a Dakshana scholar and hopefully attend IIT because it is my cherished dream to attend IIT and my family has no capacity to pay for the high cost of coaching class. I belong to a middle-class family and my father is a farmer. I have heard how my father has brought my family to this level and have decided to work hard and reach the sky. I don?t want to give further stress to my family. When I heard about the IIT-JEE I didn?t know what it was but I wanted to top it. I was told how expensive the coaching classes were and I was shocked. Yet, I became more determined when I was told about IIT toppers who came from uneducated areas. My heart rose after being informed of Dakshana foundation. I thanked God for Dakshana and Novodaya. I didn?t want to lose such a chance. I started to read textbooks from 8th and 9th class to prepare for the Dakshana exam because I thought there would be a thousand students. After giving the paper I felt very nervous because even though it seemed easy I felt that I had written too many wrong answers. I lost hope that I would be ed. Moreover, no result had come in a half a month though there were only 338 students.
When my teacher told me that I was ed through the exam by Dakshana it was hard to believe. I only became convinced after I received a call. There was no limit to my happiness. It was beyond any words that I could explain. I called home to tell my father about my success at the exam but found out that he was ill and had been hospitalized. I was only told that he had a normal fever. After reaching home I came to know that he had had a heart attack but had been saved.
I decided that I have to work hard in Pune and be successful in the IIT examination. I want to be one of the super thirty of IIT and be a successful person. I am thankful to both Navodaya and Dakshana. Both these institutions have given me a golden opportunity that will help me in my life. I will never forget their help.