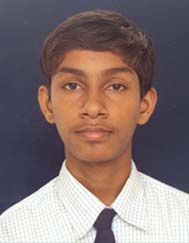 JNV Anuppur I'd like to become a Dakshana scholar and hopefully attend IIT
I'd like to become a Dakshana Scholar and hopefully attend IIT because IIT JEE is a prestegeous examination and at least every science student has a dream to become an IITian and pass IITJEE with his best possible Rank. Dakshana is helping some of the brilliant students of JNVs all over India whose parents could not afford thier children to get the coaching of IIT JEE.
I had an elder brother. He is also preparing for IIT JEE. My parents had to afford a lot for his study. So now they are not in a well position to afford for me also. At this time Dakshana Scholar has come to be very useful for me now I can also dream to become an IITian.
I had heard that approx four to five lakhs students attend IIT JEE out of which approx 10000 students got selected. To prepare students for this tough competition Dakshana was doing all the possible efforts for our preparation.
I had heard from my parent JNVs teachers of the good results of IIT JEE of Dakshana Scholars. I also heard about the teachers from T.I.M.E. Their teaching techniques, thier preparatory methods for the students. This all has seems to me good.
Dakshana provides thier students a good study environment for preparation towards IIT JEE.
It was one of the happiest moment for me in my life when I got the news that I had selected for Dakshana. I thought that I had crossed the first step towards IITJEE also many steps had been left but I think that Dakshana wills urely help me to cross rest of the difficult stages and I will surely got selected in IIT JEE.
With all these hopes from Dakshana I want to become a Dakshana Scholar.