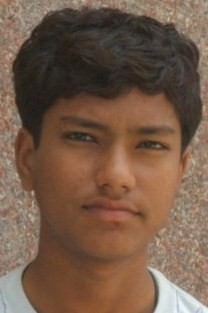 JNV Bikaner I'd like to become a Dakshana scholar and hopefully attend IIT
Every student has a goal in his mind and he puts all of his or her efforts to achieve it. I also have an aim in my life, which is to become an engineer. The Indian Institute of Technologies are the third ranking institutes in the world. I want to join them but I belong to a poor family who cannot afford the cost of IIT coaching. But I heard about the Dakshana foundation who has given me the golden chance to become an IIT?ian. Dakshana gives free coaching and other facilities such as books, coaching faculty, etc. We are very thankful to the Dakshana institute. There are so many students in India who have a sharp mind and are capable of becoming engineers. But due to the high costs of coaching institutes they cannot achieve as per their capability. Someone has to do something for them and Dakshana has done it. In the future I will try to do something for these children with respect to Dakshana by giving a part of my salary. I will try my best in this way and I have firm determination that I will cross the IIT exam with a good rank. We will succeed in the dream of Shree A.P. J. Abdul Kalam. The engineers who pass out from IITs are very efficient and capable. This is why I want to join IIT. I will donate one fourth of my salary to Dakshana or any other place to make our India a successful country in the world. Our efforts will reduce the number of people in poverty as soon as possible so we can have a great country.